As regular people to this site already know, I try to give you tools to help you be successful as writers. The most difficult task for people is marketing. For me, it is something that comes like second nature, but for others, it's as big a mystery as the origin of the universe.

In my prior life (i.e. before spending full time activities in publishing) I was a Software Engineer, a Product Manager, and yes a Marketing Manager, among other things. When I came into new organizations I was amazed at how they would make decisions "from their gut" rather than from "data". Well I'm a data kind of gal so I've always paid particular attention to numbers and you should to.

If you don't track your results, how do you know what is working and what isn't? The good news is that there are many ways to track even for those that don't have access to sales data except during royalty statement time. I'm going to discuss social networking stats (tweets, klout scores, face book likes, etc) as well as Amazon tracking...and cover that another day. Instead I'm going to focus on a site that has been very good for Michael and other Ridan authors...Goodreads.

First and foremost if you are an author and not a member of Goodreads...go sign up now. I'll wait...done? Good. Now did you sign up as just a member or did you claim your author author profile? No? Well it's pretty simple - follow the directions here.

Okay now when you login, in the upper right of the screen you'll see a link to the "author dashboard". While there is a lot on this page, the thing we're going to concentrate on is the stats which can be found right at the top left. Here is what Michael's stats look like:

You should open a spread sheet and record this data. I do it by having the following columns: date, num books, total add, total rating, total reviews, on shelf, unique, fans, friends.

From looking at Michael's data you can see we've focused on getting books on the shelves, and ratings/reviews and really haven't spent much time collecting friends or fans. We'll discuss how you effect these numbers (i.e. make them grow) but for now let's focus on data measurement so that once we start doing things, we can decide if our activities were successful.

Now, at some regular interval (daily, weekly, monthly) you should add a new row to your spreadsheet. I've been off goodreads for many many moons, and recently I've pushed Michael to spend a bit of his day interacting with people on this site (because he has a new release coming out in November) so I've resumed my tracking to see how well he's doing. I try to collect the data daily but sometimes there will be a few days between data captures so I always "normalize my data" by looking at the information on a per day basis. Let's use some of Michael's data to help illustrate this.


The "change" column if found by subtracting the data from this row with the previous row. Then the Per Day is Change divided by number of days. You could of course eliminate the change column and just do a single calculation by using a formula such as: =(D24-D23)/M24 but I don't want to turn this into a spreadsheet tutorial. 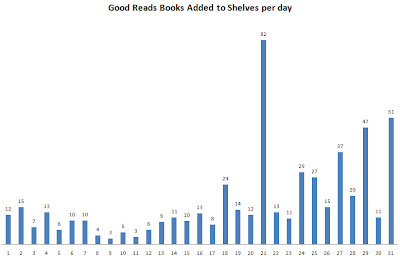 Once you have the data, you can start doing initiatives to see how each one effects your baseline. and the ideal situation is that the baseline (the level when you are doing nothing) increases on it's own even without promotion (via word of mouth etc). But without tracking data of this kind you'll have no clue as to where you are and how to get you to where you want to go.

Posted by Robin Sullivan at 2:33 PM

Thanks for this. I'll be needing it once I get my first book out there and make the change to author on goodreads.

Thanks, Robin. This is a neat way to measure, but I have been wondering for a while what is appropriate for an author to do on Goodreads. Is it okay to thank people who leave reviews? Can I follow them? A marketing person at one of my publishers told me that Goodreads folks are wary of authors friending them, so I've stayed away from doing that. I know I can host a forum but I haven't done it because I'm not sure how to drive people there if I can't connect with them the way a reader would connect with another reader.

Thank you for this information, Robin. Being newly indie published, I joined Goodreads, but I'm unsure, too, how to use it to reach readers other than to share my reviews of books I've read. I'll be interested in learning more from your posts about Goodreads and the other social networking venues.

Maybe you will want to put a facebook icon to your site. Just bookmarked the site, however I must complete it manually. Simply my 2 cents.

Thanks, Robin. The topic of Goodreads comes up a good bit on the crime fiction author discussion lists because a) it's a powerful social medium, b) most of us aren't using its tools to nearly the maximum capacity, and c) the user interface stinks for intuitiveness. In fact, I wind up cheating, using a Facebook group that was created by people in the main Goodreads group that I frequent. I think they have problems with Goodreads, too.

I've interacted on Goodreads for the better part of a year, and I'm not getting many reviews or fans. I wish you'd talk a LOT more about Goodreads.

Awesome post! I've been on Goodreads for a while and I know that the giveaways add tremendously to the to-read stat. How much of that translates into sales is an open guess, and I think varies from book to book, with how badly people actually want to read it.

Looking forward to your ideas about interacting - I've been hesitant to do that (mostly because of time, but also being a Goodreads author), but I'm thinking of starting a discussion for my next book.

thanks for this. I didn't even know about my dashboard stats! *newbie* I look forward to your post on what interacting on GR looks like.

Robin--I'm signed up for Goodreads and I have an author profile, but I've found it a very unwieldy site to navigate, very confusing. In any case, I can't find the "author dashboard" that you said was in the upper right hand corner of the home page. I don't see any "Welcome back, Mike." I only see "recent updates" with reviews of other people's books by the usual suspects.

What am I doing wrong?

Mike:
Are you signed in as an author? I have heard some authors make the mistake of creating two profiles -- one as a reader and one as an author. You want your author profile to be the only way you sign into that site.
--Joe

@Joseph - There are differing opinions on responding to reviews. Some feel they can't respond "truthfully" when they know the author is watching. As with anything it's "how" you do it. Never fight or disagree with what someone writes. I personally think that readers really like hearing from authors - and get a lot of feedback that seems to bear that out (although those that are upset probably don't say anything). I'll actually talk about this subject more in the post about working with goodreads more.

@Mike - I agree with what Joseph says - you might not be signed in as the author. Give me a link to your Amazon Author page and I'll send you a message and you should be able to trace that back to the right email account.

I was just about to ask the same question as Mike, and the wrong sign-in email addy was right on the button.

Thanks a bundle. This promises to be fun :)
-Dan Sawyer

Robin--Here's the link to my Amazon Author Page.

I thought I was signed in as an author on Goodreads, but it's so confusing, I can't really make head or tail of it.

@Mike - you do have a goodreads account you just haven't "claimed the author profile page". Follow these insturctions:

How Do I Join?

2. Search for yourself and click on your published author name. The author name is listed below the title of your book in the search results. If you do not find your book in our database of published works, please see section below (who can join).

4. Scroll down to the bottom of the page. Click "Is this you?" to send a request to join the Author Program. Please give us a few days to process your request. You will receive email confirmation when we successfully upgrade your user account to an author account. Joining the program merges your author page with your member page. The email will also contain further instructions for managing your author profile.

Another informative blog… Thank you for sharing it… Best of luck for further endeavor too.

I've from heard some Goodread members that they won't friend or fan anyone who has more friends than books they listed as read and reviewed. If you're an author, you should also be a reader.
I personally will check "compare books" before I respond to a friend request.

Excellent idea. I've never been very good at measuring results, will use your ideas to start doing it properly!

I like the helpful information you provide in your articles. I will bookmark your weblog and check again here frequently. I’m quite certain I will learn plenty of new stuff right here! Best of luck for the next!

I’m really enjoying the design and layout of your blog. It’s a very easy on the eyes which makes it much more enjoyable for me to come here and visit more often. Did you hire out a developer to create your theme? Great work!

Just wish to say your article is as amazing. The clarity on your submit is just great and that i could assume you are a professional on this subject. Well together with your permission allow me to snatch your feed to stay up to date with drawing close post. Thank you 1,000,000 and please carry on the gratifying work.