The Book Study Industry Group has been surveying book buyers on their ebook buying habits for the last few years now. In some of the preliminary pages that they released was the following graph: 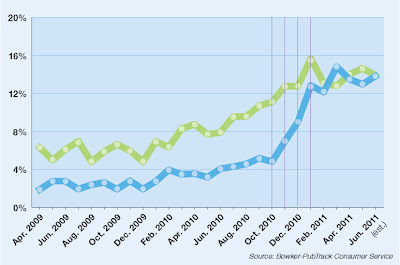 I took away a few things from this:

The report also reported that ebook sales in Q1 2011 showed 13% of total book sales (based on Bowker Pub-Track's survey of 6,000 US book buyers.

Posted by Robin Sullivan at 8:15 AM

The delta in the graph is in line with the ebook sales delta (in dollars)! While I suspect there is a wee bit more growth that isn't centered around the holidays, it will be a seasonal transition.

Is the industry ready for what will happen over the next 30 months?

Thank you for the great chart. I need to see things like that to keep the time-line in perspective.

I'm looking forward to this winter season. I've got 2 books (might have a 3rd) and 4 short stories already on sale.

I'm hoping to sell enough books to break even on my expenses. This is supposed to be a business, but I'm still in the 'expensive hobby' stage.

Neil - I heard there were 10 million Kindles going out this year. 4 million to the UK. Haven't heard about the Nook yet, but I'm talking to friends who want one REALLY bad!

This winter promises to be a big leap upwards from Niche Market closer to Main Stream.

I'm thrilled to be a part of it.

The internet has become a rich repository of knowledge and this has made it easier for people interested in gaining knowledge to have access to them. A large number of websites have come up on the internet that specializes in providing books to the interested people at extremely affordable cost. These websites have become popular especially among the student communities who are the most obvious beneficiary of any website, which provides books at extremely low prices or even free of cost. e-libro.com is one such website that offers Spanish ebooks to people interested in procuring them.


This website is an example of how the internet revolution has made it extremely easy for people to enjoy access to information that may have otherwise been out of their reach. The website has a number of useful features that makes it extremely easy for the visitors to navigate around and find what they are looking for in there. The descarga libros feature allows for the visitors to this website to download books from there. This extremely useful and helpful feature has made this website immensely popular. The visitors can comprar libros or buy books from this site, which usually costs far less than the price in the market.
The website offers a number of advantages to its users. They can take advantage of the libros gratis feature allows the users to have access to a large collection of free books at their disposal. The collection of books at this website covers a wide range of topics including libros de historia or books related to the history topic. Thus, they present a rich collection of books in the Spanish language for people who may find it difficult to get access to books on any other format. No booklover is like to miss a chance like this.