I've said it many times before but ebook revolution really started in November 2010 but the principal players were indies. People like my husband Michael J. Sullivan, Ridan author's Nathan Lowell, Marshall S. Thomas, Leslie Ann Moore, and fellow indie authors like David Dalglish and H.P. Mallory really saw a jump in their sales that was down right mind blowing.

From trying to piece together information from articles and blogs it would have appeared that that big publishing houses weren't seeing the types of huge increases at that time - and in fact many of the top spots in the genre Amazon Bestseller lists were held by the indies attracting the ebook reading population with their free, $0.99 and $2.99 books.

But I knew that would not always be the case the big-six would eventually see a large percentage of their sales moving digitally. I was astonished that each time I saw an industry report with findings from "the big boys" that their numbers were in the 10% - 25% range with regards to percentage of ebook sales.

But I think we are finally starting to see a major shift in this regard. A good way to gauge what is going on at the big houses is to watch the bestseller's lists. After all the vast majority of the titles on lists such as NYT and USA Today are generally published by the large houses although an incredible breakout indie will show up from time to time.

So to me this graph really tells the full story. USA Today aggregates sales of all formats when determining their best sellers. So they'll lump together ebook, paperback, and hardcover sales...but...they also report of those three formats, which sold the most copies. Well below is some fascinating data about the number of titles where the ebooks are outselling print.

If you find this graph hard to read let's give you a blow-up of the important part 2011 - 2012. So what can we see. About 20% of the USA Today Titles were selling more ebooks for most of 2011 and in some cases that raised to as high as 40%. As the Christmas buying season started, paper came back in a big way as physical books were bought for presents. But there was more under the tree then just book. eReaders were also given and the people receiving them flocked to the "big names." 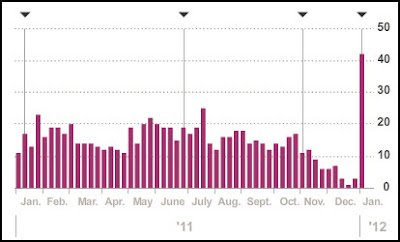 So what does this mean for indie authors? Well I think it's safe to say that your exclusive hold on that portion of the market is getting encroached upon by the big boys. I also noticed that Orbit, Harper Voyager and Angry Robot all offered $0.99 - $2.99 pricing of popular titles over the holidays. More on this particular environment over the next few days.

I'm starting to see traditional titles show up on sale on Pixel of Ink as well.

Good & helpful information. Glad to see you back! I went through that last summer and am still dealing with . . . everything.

It will be interesting to see how the market changes. I think sometimes the indie authors still have the upper hand in the nature of the ebook promotion as most of it is done online, and the larger publishers just don't have the resources or time to pour into promotion like that.

I decided to publish my first children's book The Little Cupcake Divas as an ebook. It's a delightfully written and illustrated multicultural children's book. I'm glad I chose this route. It's another platform to reach and connect readers to a good read. You can get at: www.mirasmartshop.com.

Ebooks are now the latest trend and will soon affect the entire educational system, don’t you think? I think technology has already soared to greater heights that even the educational system’s usual norm and the authors’ usual practice in writing will be greatly affected. Well, whatever it is, I hope it’s for the greater good.

I am not sure where you’re getting your information, but great topic. I needs to spend some time learning much more or understanding more. Thanks for great info I was looking for this info for my mission.

All the big libraries with time become just drives. I have like 30-40 paper books in my home library and something like 300 or more on the drive. It is my opinion, but publishing is dying. And it isn't a mainstream, it's evolution of the information perception. We just do what is comfortable for us, if i need to write an essay in 5 hours, i won't go to the library, i'll open my text book on the laptop and find the information i need in 5 seconds.

IOT Training in Bangalore - Live Online & Classroom
IOT Training course observes iot as the platform for networking of different devices on the internet and their inter related communication. Reading data through the sensors and processing it with applications sitting in the cloud and thereafter passing the processed data to generate different kind of output is the motive of the complete curricula. Students are made to understand the type of input devices and communications among the devices in a wireless media.

I learned World's Trending Technology from certified experts for free of cost. I got a job in decent Top MNC Company with handsome 14 LPA salary, I have learned the World's Trending Technology from Data science training in btm layout experts who know advanced concepts which can help to solve any type of Real-time issues in the field of Python. Really worth trying Freelance SEO expert in Bangalore

Thanks for sharing,the entire post absolutely rocks.Very clear and understandable content.I enjoyed reading your post and it helped me a lot.Keep posting.I heard about an AWS training in Bangalore and pune where they provide you certification course as well as placement assistant.If you are looking for any such courses please visit the site
data science training institute in bangalore

Get customized printing for your business done in a few minutes for the best price from Inkmonk.

Smartphones are extremely sensitive to external damage. So it's best to protect with a case. Get your custom design embedded personalized Phone Case from Printo.